Progress: A Town at a Time 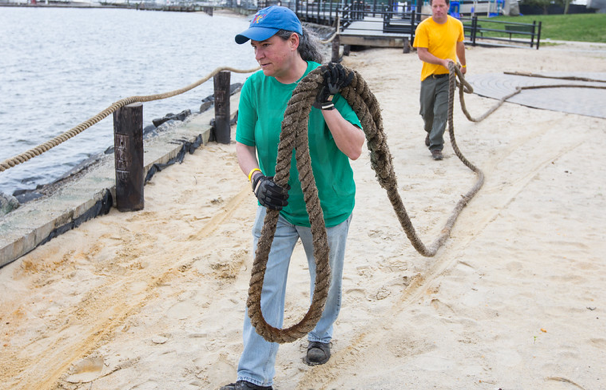 A familiar scene. It’s morning. A woman sits at home, steaming hot cup of coffee in one hand, the other on the keyboard of one of her two desktop computers and she thinks to herself ‘how could I possibly have gotten this many emails overnight?

This is how I picture Carolyn at the start of the average work day. The rest of the day is comprised with typical corporate agenda: meetings, making phone calls, checking in with clients, managing ongoing projects. The usual. But much like the rest of us, the workday and all that it entails is never the whole story. Our lives are a braid of the personal and professional, woven together in a way that makes us all unique.

Carolyn Broullon was born in San Francisco, California. As a toddler, she moved with her family to Sonoma. She illustrates her time in Sonoma with an air of the too typical American experience. Single working mother, two kids, dirt poor. “I knew what it was to go to bed hungry,” she recalls. By the age of seven or eight her family had relocated to where she’d spend most her life – Brooklyn, NY. Here, she fell into Market Research. She remarks that after 25 years in the industry, it’s hard to remember exactly how she got to where she is today. As Carolyn looks back on her entree into the industry, I’m reminded of how often I’ve heard that people found themselves in Market Research unintentionally. I’m curious about her path, and she lists some of the stops along her way. She found an ad in the Village Voice for Data Development (now Radius Global), spent time with Research International, started her own company called Field & Tab in which she worked for about seven years, and is now a Vice President at Gazelle Global.

While running Field & Tab, Carolyn was looking for a summer house. She was living in NYC at the time, and wanted something as far South as possible, while remaining within walking distance of the ferry landing. She landed on Highlands, New Jersey. For a time, she commuted to Manhattan. Now, Carolyn lives and works full time from Highlands. When asked to describe her home, she illustrates Highlands almost idyllically, and says she’s “such a Highlander now.” As she tells me about her home, children riding bikes around the neighborhood, the sense of community she feels, the beautiful view from her house, it’s not surprising that she doesn’t miss the city.

In 2012, Hurricane Sandy wreaks havoc on the area, and facing the destruction and resulting dysfunction, Carolyn is called to act. The municipal buildings were inoperable. Already involved in the goings-on of the community, she begins in April of 2013 by broadcasting town meetings online for those who could not attend, either because they were displaced or because they were unable to get to the elementary school gym where the meetings were held (until December of 2015, when they moved to the Community Center). When it came time to elect new officials, Carolyn was disappointed with her options on either side of the partisan government. The leadership had seemed to remain the same. So, with eleven other Highlanders in the summer of 2013, she formed Highlands United to petition for Non-Partisan elections. After negotiating to be able to work from home in August of 2014, she decided to run herself, went door to door, gained enough signatures, and in November of 2015 was elected to the Borough Council of Highlands, her first term starting January of 2016. She now serves as Council President, which is akin to Deputy Mayor.

Struck by her commitment to her community, I ask her to detail some of her responsibilities and obligations, recalling that she in fact, already had a full-time job at the time of her appointment. Council meetings twice a month, requested appearances at meetings nearly every night for one thing or another, she admits that “everyone wants [her] to be everywhere.” She walks down the street and people know her, even if she doesn’t know them. However, “people are so appreciative,” she notes, and “it’s very rewarding to be able to solve somebody’s issue.” In addition to putting out such fires, Carolyn has started several initiatives in the town in order to, in her words “bring them into the 20th Century, as the 21st is too much to ask.” She has enacted efforts to make the community more sustainable, resistant to storms, and has done so while living by example. She has solar panels on the roof of her home, drives a hybrid, and has a compost pile in the backyard.

Carolyn, by any measure, is a success in a global industry, acting locally.
I wondered how her community work affected her career in Market Research. Her answer was relatively simple, but lead to a conversation about the complexities of an industry that has changed so drastically since its inception. “Research itself is talking to people” she observed, and “it’s very akin to politics” in that way. She notes the similarities at the root of these fields. Going door to door, speaking to real people, in all walks of life. Representations of a population. So, in what ways has the industry trended away from these roots? Are we over-relying on technological advances that have seemingly connected us to infinitely more people?

We weigh the pros and cons of these resources all the time. The importance of quality data is vastly understood, but are we, as a community, finally realizing the implications of the ways in which we’ve distanced ourselves from the human elements of these practices? Carolyn reflects on a glaring example at the forefront of our minds… “It wasn’t just the national election, it’s that every poll got it wrong. Technology is great, but we need a way to bridge that gap.”

In an attempt to address these perpetual issues, Carolyn has used her public service to act on what she can. “I can only change what is in my power to change. National or local level, I can only continue to move forward.”

Carolyn tells me that she has always been more of a listener than a talker. A quality that I am sure has helped her both in her career in the industry, and when she steps into what I can only assume is a Clark Kent phone booth by the ferry landing to transform into this community leader. I am thankful for what she has chosen to share with me.

As our conversation comes to a close, I am inspired. In an ever-changing world, it is comforting to be reminded that all we need to do is move forward.